Act One: The State I Am In

We begin in an airport bar, as stories like these usually do. I am sipping a beer and writing in a notebook, watching hot, tired, and cranky people pass me by. I can’t tell who’s starting their trip or ending it. Airports generally bring about the worst sort of resignation in people

And as all stories about me and my wanderings go, we must begin with exposition and a soliloquy and establish internal struggles.

I have a job. I teach mostly math, and a bit of reading, to gifted kids. I am now known as a somewhat-expert in the field of gifted education. Endorsed and whatnot. A while ago I told myself it was time to start specializing in things, pick a lane and go. Gifted was one, drama another, history is in there somewhere as well. The gifted thing is fine, but these days there is little room for drama and history in gifted education. The era of STEM.

And so I teach Math. And I find ways to be creative. My fourth graders wrote a play, and it was wonderful. The kind of thing worth getting out of bed for in the morning.

It is time to board my plane.

I stare out the window at a darkening sky and I fly east, as a continent rolls away and a great ocean stretches endlessly before me. I sit in silence. I read, a little. Try to sleep, and fail to do so. The plane is dark as the people around me sleep and dream or pretend to sleep and dream.

I am thinking about a conversation I had with a former student the other night. A former student, a former member of my theatre company. No – I am the former member. We are recreating a scene from a play I wrote 13 years ago. She is giving me counsel. She, like so many others, is wondering where I’ve been. I have barely left my house in three weeks.

I am on a train. I am in England. Green, lovely England.

I have been awake for over 24 hours. But I’ve done this many, many times, and I can function well on autopilot. Grab my bag, find an ATM, top up the local SIM-card-with-unlimited-data-in-Ireland-and-the-UK. 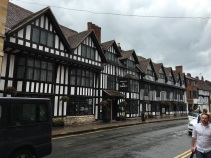 It is sunny in Stratford-upon-Avon as my bag rolls along the cobbled high street and I pass the home where William Shakespeare was born. I arrive at my hotel only to find out Google Maps has directed me to one of TWO hotels in Stratford with the name Premier Inn, and so, sweating and becoming more and more exhausted by the moment, I walk another ten minutes and finally arrive.

There is time for a shower and a meal in the hotel restaurant before I collapse in a wide bed with white sheets and soft, plush pillows.

It is nine pm, and I sleep deeply, and I dream.

Tomorrow a woman named Jo Cox will be murdered on the street while visiting her local constituents as an MP of the British government. It will be the beginning of the end of the United Kingdom as we know it.