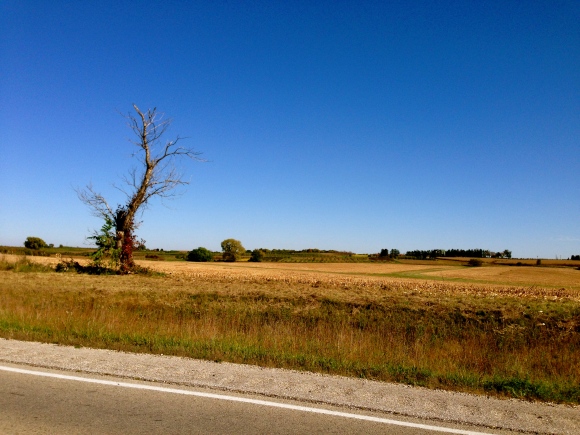 Woke early and enjoyed a third morning of being able to read and drink coffee at my leisure. Graded papers until around noon, then decided to take a long drive. Followed Rt. 71 westward, the cool autumn air whipping around the inside of my car as I listened to Dylan’s Pat Garrett and Billy the Kid soundtrack and the first album by The Head and the Heart. Same albums I played over and over again during my various winter trips across the eastern half of the United States.

Sun shone through the cornfields, glowing in the afternoon light. Pictures never do it justice, the way the fields look this time of year, contrasting against the blue sky and the deep green grass lining the roads. This is the Midwest at its loveliest, and I wish it could just stay this way forever. Not looking forward to the long six months of brown and grey and dead everything. 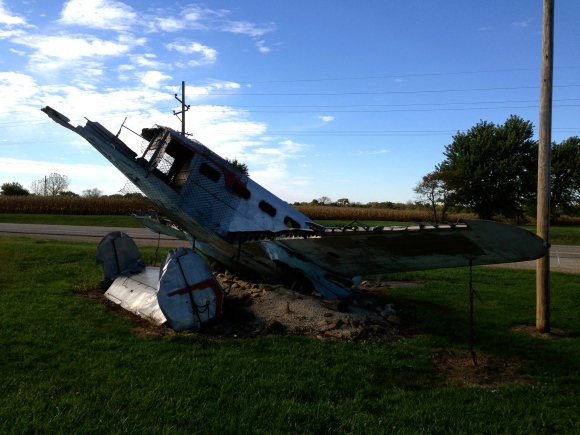 Drove through Newark and Norway and a surprisingly vibrant-looking Ottawa. Used to drive this route all the time twenty years ago, back and forth from school to home and back again. I gas up and I hear a group of farmers chatting. Gas smell on my hands is pleasant, makes me think of the short time I did farm work myself.

Jump back in the car, now a time machine, continuing all the way to Starved Rock, last refuge of the real Fighting Illini, according to legend and a somewhat sketchy oral history. Obscure Springsteen tracks pour out of my stereo as I wind through a canopy of orange and yellow and russet. Take a short walk in the state park along the Illinois River, careful not to aggravate the various ailments plaguing me. Only thing I’m good for these days are sitting with a nose in my book, or driving in my car.

Traffic is slow in spots as cars queue up behind a combine or a grain truck lumbering their way to the side roads. For some reason I spot no less than three abandoned cars along Rt. 71. For a moment I wonder if I’m heading towards some apocalyptic disaster, and the cars are the only remainders of those who tried to flee.

Then “Thundercrack” comes on and I forget all about the apocalypse. 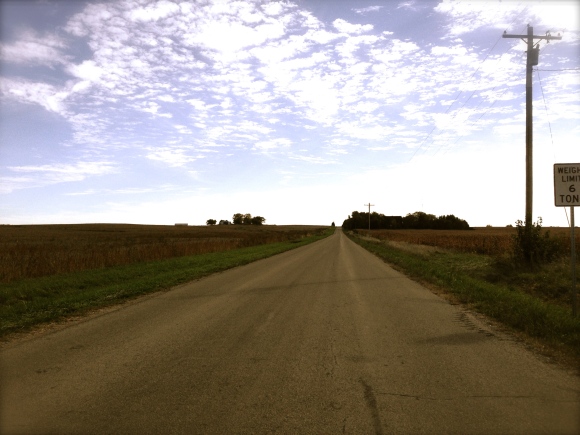 It rained off and on today, so I spent most of the day sleeping in, drinking coffee, and reading Holes, a novel for kids I should have probably read a long time ago, but never got around to it. The setting and premise were interesting, but I thought the ending had way too much of the ole “Everyone Gets Everything They Ever Wanted.” Maybe that’s part and parcel with kid lit, but I don’t know if I really get why it’s such a well-loved book. Maybe I just can’t read books for younger readers anymore.

The weather cleared up and so I ran out to get a few things for the house. Still rebuilding and restocking the new place, even after living here for three months. I may not have any dressers, but as of today I am the owner of a Crock-Pot. Ran into a few people I know, which happens more often now that I’m living in Oswego again.

The windows are open and there’s a nice breeze moving through the house. It’s Saturday night and the sun’s going down. Leaves are already falling off the trees, but we haven’t hit peak color here yet. Weather’s finally starting to cool off, hopefully for good. I’m just not made for the hot weather, and the fact that it’s mid-October and I was still running my air conditioner as of yesterday just makes me shake my head. Quite the toasty world we’ve got these days. 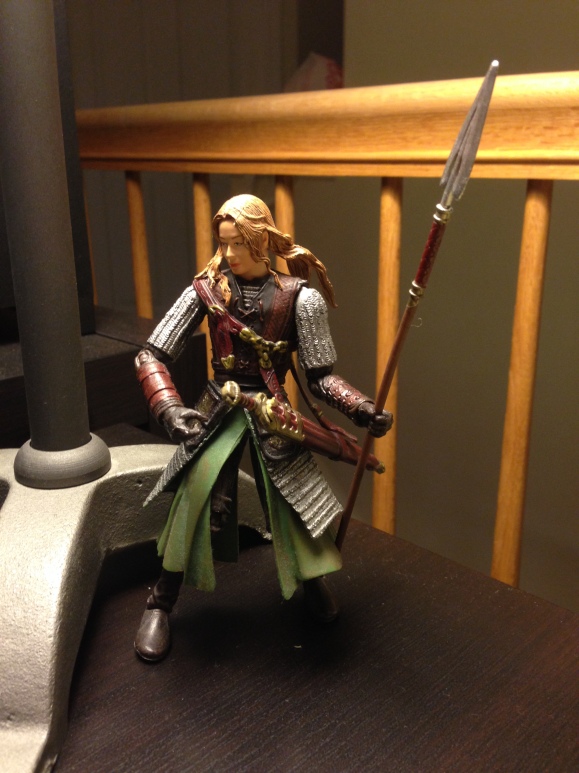 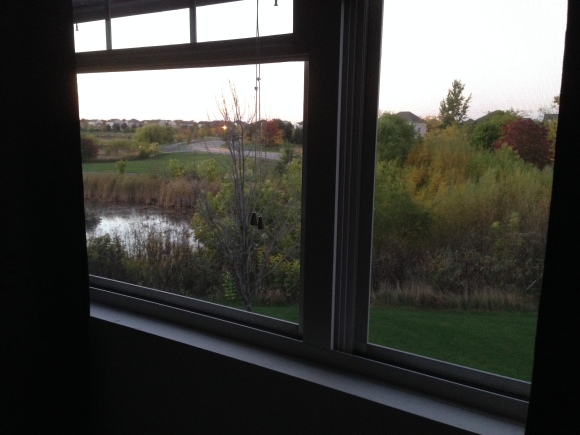 It’s “Reading Week”, which means I’m off class all this week. And it’s pretty sweet. It’s a time to get caught up on assignments, review what’s been studied, and prepare for the final four weeks of class. That’s right. I’ll be more or less done with this semester on November 30th.

(There’s a huge paper that I have to do that’s worth 70% of my grade for this Research class, and we haven’t been given any information about it yet, but it’s not due until December 4th or something like that. So I’m not sweating it right now.)

Today I pored through all my notes and readings for the Movement class, trying to make heads or tails of it. It’s all that dance theory stuff I complained about earlier, so I won’t bother repeating myself, since all I seem to be doing lately is fret about that class. We don’t meet again until November 12th, so I have a nice long break from having to swoop around and write my name in the air.

After doing that all day I decided I needed to get out of the apartment a bit and stretch my legs. I’m finally getting over this cold I had, so I actually tried to run for a bit. My lungs weren’t really interested in doing that for very long, but it’s more than I’ve done lately. I’m hoping I keep up with it and don’t get too bogged down with work in November. (Exercise relieves stress, kids!)

We’re deep into fall here, although most people would say that it’s actually winter that has settled in. The sky is overcast a good amount of the time, and it rains a lot, and….wait…that’s kind of like what fall was like. And summer was pretty wet as well. Okay, so it’s still wet and overcast all the time, but now the temperature has gone down, too!

Where during the summer it was usually in the high 60s and low 70s, and fall meant temps in the 50s, winter means low 40s/high 30s. And that seems to be the extent of it. I know it’ll get colder, but nothing like we have in Illinois. Snow is fairly non-existent. The leaves are turning, but not in that dramatic all-at-once brilliance you have back home. The leaves reluctantly change to a dull brown or yellow, and take their time falling onto the ground. We moved the clocks back yesterday, so it was getting pretty dark outside when I went for that sort-of-run around 4:30. 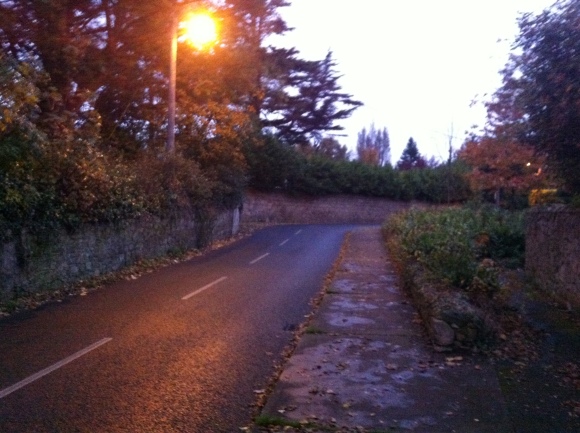 My suburban-Dublin neighborhood, but here it feels like it’s the middle of the country.

Because I’m off this week, and because I’ve lived very frugally during October, I’m going to treat myself with a little excursion to the northern part of Ireland. I’ll be back soon with a report from the borderlands between the Republic of Ireland, where I live, and Northern Ireland, which is a separate country still part of the United Kingdom.