I’m down to my last day or two here in Dublin, and I’ve gotten behind in the chronicles, so I’m going to try and dash out a few quick posts before I leave.

After we celebrated my friend Linus’ 40th I joined his family for a few days in County Kerry, in the southwest corner of Ireland. It’s the gorgeous part of Ireland. Mountains, lots of green, lots of water. Lots of Kerrymen. The people in Dublin don’t have the highest opinion of people from Kerry. Well, from anywhere that’s not Dublin, really. Lot of City Mouse, Country Mouse business. As someone who grew up in a small town and comes from a farm family, I’ve heard it all a million times, but it’s sad to find the stereotypes yet again.

This was found in the town I stayed, and NO, it had nothing to do with my booming teacher voice. We Americans are tagged as “loud” all the time, but I’m trying to counter that stereotype by pointing out that we tend to project our voices more than the Anglo/Irish peoples do, who tend to keep everything closer to their chest. It’s difficult to admit, but half the time I can’t hear what anyone’s saying if we’re in a pub or a restaurant with a lot of background noise.

Anyway. It felt good to be in the country, and see mountains and mist, and eat seafood chowder and spend some time with friends. We drove the Ring of Kerry and visited little towns and cafes and watched World Cup matches and let their little daughter play in the ocean for a while. 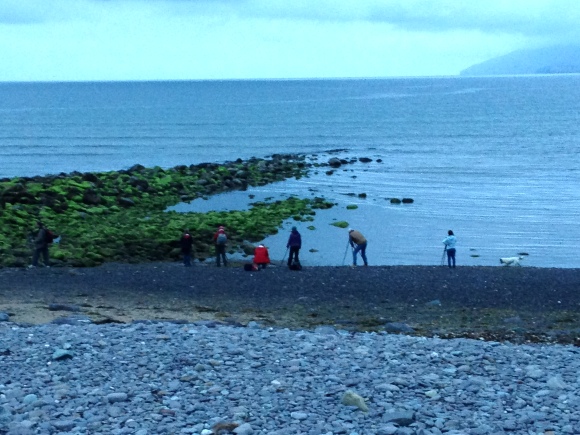 The reflectors on the side of the road look like the Irish flag! (At least in Waterville they do.)

I spent the next two weeks in almost complete isolation, just hanging around the house, going for walks, drinking tea, and reading a lot. Needed to be frugal for a while since I decided to take a second trip to London. (More on that one later.) I keep hoping I’ll grow out of this prolonged introverted mood of mine. I can spend days and days and days without coming into contact with anyone and I’ll be perfectly content. This is not exactly the best habit to support, so I was hoping that I would burn myself out of it after a while. It’s not good to wall yourself off into your own little world for too long, and I’ve neglected far too many relationships back home as a result. I dunno…maybe it’s a necessary thing. Maybe you need to cocoon yourself off from life for a while until you’re ready to head back out into it again. I won’t go into any tired metaphors about transformation and turning into a stupid butterfly. But I definitely feel like I’ve come to the end of something, whatever that is.

But after all that I got out of the house and went to the Galway International Arts Festival for the third time. Another couple of friends of mine from Dublin hadn’t seen me much this summer, so they decided to take a weekend away from family duties and join me. We met up in one of my favorite places to hang out while in Galway and stayed up far, far too late, but looking back it was more than worth it. My first and best memories of Ireland were spent in the Rosin Dubh and in Galway, and while they’ve ripped out the front seating area (for the most part) and turned the place into a late bar, with disco, it can still be a great place to have a pint and a chat.

It was brutally hot in Galway that weekend, and the tiny room in my B&B offered no comfort at all, so after a rough night of sleep and a full Irish breakfast we met up again and wandered around a bit before I left for a matinee performance of Ballyturk, the new play by Enda Walsh. It starred Cillian Murphy; kids, you may know him as the Scarecrow from Batman Begins. I can’t even begin to describe the play, as it was quite strange and brilliant and weird and profound all at once. Gonna need a bit more time on this one.

We had a nice dinner away from the crowds in Galway and found a quiet place called the Scholars Rest to wind down the evening and have some of the local varieties. “Thunder Road” played in the background and I could start to feel it. That little tug, that little reminder of American roads and restlessness. Tried to push it aside, but it kept reminding me of that little truth I sometimes like to ignore: America is your home. In the end, you’re just a guest here.

Poulnabrone dolmen in the Burren.

You can read more about this rock formation here. It’s a portal tomb, in short.

A mass murder of crows, on top of a hospital?

Sunday morning comes and I walk from my B&B through the town centre, which is quiet and sleepy after the final mania of the arts festival. The buskers are out, though, ready for one more day, and a man in black sings “Over the Rainbow” in a deep baritone and once again I’m being pulled back, back, by those songs, those American songs, all about getting out and away and not looking back, and all they really do is slowly pull you home.