Ick of the Sea 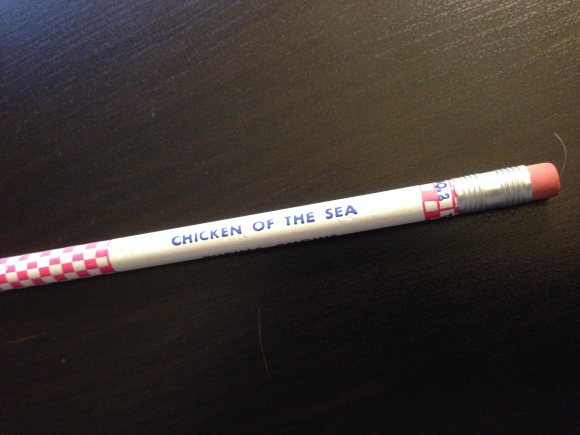 This is the very last of the Purina pencils.

Almost 30 years ago I had a bunch of these, which a friend of mine would alter by scratching out key letters in the Purina products advertised on the pencil. PURINA CHOWS became PURINA COWS; CHEX CEREALS morphed into CHEX EELS; PET products became ET products (how’s that for an 80s artifact?); and of course Chicken of the Sea became ICK OF THE SEA.

Don’t ask me why I still have it. One of those things that survived purge after purge of childhood mementoes and countless moves.

That’s all I got tonight. Had a horrible night’s sleep, still not feeling any better. Hoping to go to bed early and get some real rest.

Tomorrow apparently there is something called a Boosterthon pep rally. I am scared.