I am but mad north-north-west.
Playing LEGO with Bug. Libations are necessary.
It might be time to shave.
HarooshLimelightLondonRoad TripsShakespearetravelThe Love You MakeTeachingThe Love You TakeFifth Grade

Act Two: The Many Dreams of Bottom, the Weaver 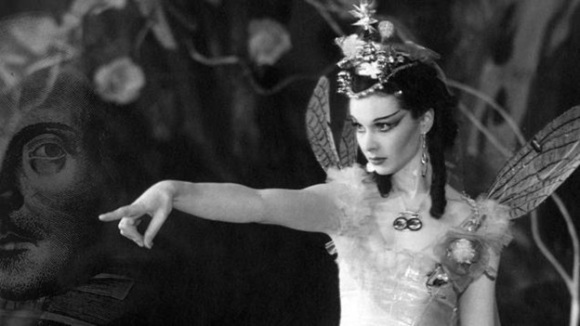 For me, the greatness of Britain isn’t defined by family ancestry, its political history or imperial might, as fascinating and checkered as that topic can be. Rather, it is Britain’s cultural contributions that continue to entertain and inspire me. The Beatles and Belle & Sebastian, the works of J.R.R. Tolkien, and of course, Mr. William Shakespeare.

It is 2016, and that means that William Shakespeare has been dead for exactly 400 years.

It is my second night in England, and I am watching a production of A Midsummer Night’s Dream at the Royal Shakespeare Company in Stratford-upon-Avon. A Play for the Nation.

I listen to the lines of the play roll out from the actors’ mouths. I recognize Peter Hamilton Dyer’s voice even before I see his face. “Full of vexation come I, with complaint against my child, my daughter Hermia.” I am pulled back suddenly to the Globe, in London, and it is 2002 and Dyer stands at the edge of the stage, as the Fool, Feste, verbally sparring with Mark Rylance as Olivia in Twelfth Night. It is a warm summer’s night and I am on my first solo trip to Britain.

“How now, spirit? Whither wander you?”

Puck enters. The words continue to ring out, familiar and comforting, this most familiar of plays.

We are backstage in a bombed-out theatre, apparently sometime in the 40s, during the war. The fairies resemble child evacuees, sweater vests and brown leather shoes. Titania and Oberon otherworldly and exotic, India and Africa, reminders of Britain’s colonial empire. 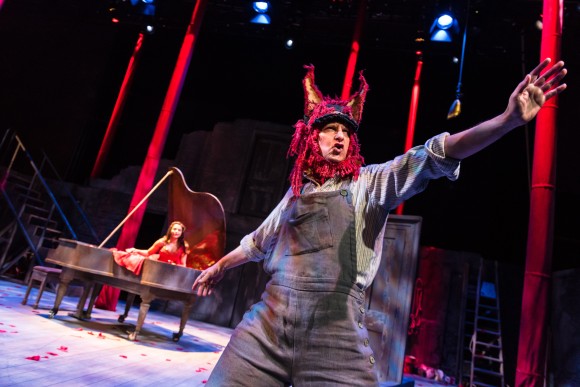 The Mechanicals scatter. The Lovers battle.

It is 2003 and I am directing my first show by Shakespeare. Titania and Oberon spar over a child. The Mechanicals rehearse. The Lovers wed. 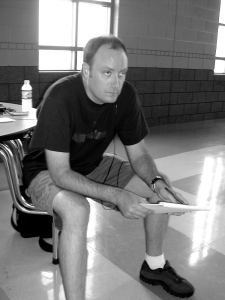 It is 2012 and I am again in the wood, with the fairies and the lovers and the actors. “It seems to me that yet we sleep, we dream.” It is 2014 and I am back at the Globe, saying hello to one of my British heroes, Mark Rylance. It is 2011 and I am directing Feste and Olivia and I am saying goodbye to the only family I created.

It is 2016 and I am in London at the British Library, walking through ten acts of Shakespeare. Vivian Leigh stands imperious and commanding as Titania. Peter Brook strips everything away but the truth and tells his Midsummer in a white box. In the next room I stare at Rylance’s original costume for Olivia.

It is 2016 and I am again at the Globe, watching another performance of A Midsummer Night’s Dream, this play for the nation, England or Britain, a no-longer united kingdom that today has voted to leave the European Union and bring about its eventual destruction.

Shakespeare has been dead for 400 years, and yet his life and his work lives and breathes everywhere I look. His words transport me through my own life, across stages and classrooms and cast parties. He reminds me over and over again about the importance of art and dreams and stories, and the responsibility I have, with my own small talents, to keep telling those stories to new audiences. He reminds me to give dreams to people.

“I have had a most rare vision. I have had a dream, past the wit of man to say what dream it was.”

It is 2016. I am behind the wheel of a brand-new BMW 3 Series. I am driving on the left. I am terrified and I am exhilarated all at once.

I am heading north. 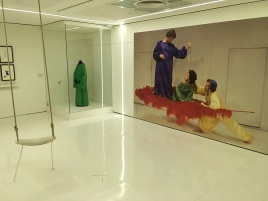 One response to Act Two: The Many Dreams of Bottom, the Weaver